Founding Fathers and the Dutch origin of Thanksgiving Day

In the 17th century a small group of English refugees set up a small colony in the New World, on the coast of what is now the state of Massachusetts. Preceding this event, these pilgrims later to be called Founding Fathers temporarily find a relative safe haven in the Netherlands, especially in cities Amsterdam and Leiden. The pilgrims play a vital role in the history of the United States and have become a central theme in its cultural identity. Some of their ideas are directly traceable to their stay in the Netherlands and some of them more specifically to the medieval city of Leiden. Many people assume America’s National holiday Thanksgiving Day directly derives form a local Leiden festival.

The refugee story
After the reformation on the mainland of Europe, wherein large groups of Christians, under the spiritual leadership of Martin Luther, turn their back to the many Roman Catholic rituals and doctrines, this movement also starts to get solid ground in England. Although less massive than in Northern and Western Europe, groups believers separate themselves from the prevailing Anglican Church. Unlike the critical Puritans, a smaller group of separatists actually detach itself from the Church of England. Among their persecuted leaders are Henrence Barrow and John Greenwood who are executed in 1593. Other members and leaders are put into prison, ousted from their (religious) posts and in their daily life are being discriminated in all possible ways. Under the leadership of Archbishop Matthew these harassments intensify. A first group of separatists, the Gainsborough Congregation therefore flees to Amsterdam in 1606. More attempts follow, although not all of them are always successful, the refugees are intercepted and thrown in jail. Families are torn apart. Over 150 refugees manage to reach the Netherlands in 1608. They join the English Church in exile.

The stay in Leiden
A group of separatist refugees from Scrooby, do not want to get involved in the disputes between the English refugees in Amsterdam and start their own congregation in Leiden, a town 40 kilometers south of the Dutch capital. The citizens of Leiden welcome this group full heartedly. Famous are the following words: The city of Leiden cannot refuse honest people access to live in the city. In these days a third of the population of Leiden derive from a foreign background and there are several other groups of refugees in the city. The English meet the French reformist Huguenots, also called Walloons, refugees like themselves. Some English separatists pray in the French Church of Our Lady and a number of Huguenots convert and join the English separatists. They will even join them in the founding of the American colony.
Economically, Leiden is the second most important city of the Netherlands and brings to some of newcomers reasonable prosperity, as they find work in the local textile and brewing industries. Several of the leaders work at the oldest university of the Netherlands, situated in Leiden. However, because of the language barrier and the agricultural background, a big part of the English refugees find a less thriving life in Leiden. One of their leaders, Pastor John Robinson, offers these people shelter in accommodations around the centrally located Church of St. Peter, the Pieterskerk. For many English, the Dutch culture and language proves a hurdle too big take. Some of the younger children adapt the Dutch way of living but the group ages.
A middle group of young people begin to leave Leiden and others return to their country of origin, England. The Dutch free morale is perceived as threatening and the results of the mission are disappointing. Most see a dark future ahead and the congregation comes to the conclusion that it is threatened with disintegration. 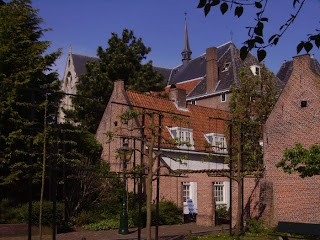 Voluntary intercontinental migration
The English language, culture and identity have to be preserved, is the belief of the group. As a result the members hit a potential contract in New Amsterdam, later called New York, and considers founding a colony in New England. The pros and cons are being weighed because there are many stories circulating about failed colonies, aggressive indigenous peoples, the lack of water and food and unknown diseases. Added to that, the voyage itself to get there is very dangerous. Still the balance hit to migration to the New World. Due to the expiry of the twelve year old truce during the 80-year war between the Netherlands and Spain, the group is afraid of the imminent threat of war and the attitude of the Roman Catholic Spain. The Leiden group, now counting 300 souls, decides to go to Virginia.

Preparations
The preparations are difficult and dangerous. Some of the leaders of the Leiden group run up against the bureaucratic problems in gaining a piece of land in the New World. At the same time religious turmoil flares in England. Influenced by this anxiety, the situation of the group becomes precarious in the Netherlands as well. During the oversee preparations one of the leaders is sentenced to 14 years of prison in England. Despite all the difficulties a patent on a piece of land is finally obtained.
The preparations for the crossing are not without worries as well. Not all members of the congregation can join because of pending cases in Leiden or financial constraints. It is decided that the younger and stronger members will undertake the first journey. Robinson stays behind with a large group in Leiden, he will die in the Netherlands in 1625 and is buried in the Pieterskerk. William Brewster leads the first group of emigrants. He is wanted by the English authorities, for drafting polemics against the Anglican Church.

The Great Crossing
The purchased ship Speedwell transports passengers from Dutch Delfshaven to British Southampton, on board the first group of English separatists. Another chartered ship the Mayflower with other members joins them over there. The crew of the Speedwell sabotage the ship to escape the year-long commitment of their contract. The Mayflower leaves alone for America. In the end, only 50 members of the Leiden congregation participate in the crossing. The other passengers are other separatists from England, a number of emigrants and the crew. After a difficult journey, in which a storm beats them of track, they reach, after a 2 months crossing, the coast of Cape Cod in New England, near the Hudson River. It is November 1620.

The new colony
Since the patents for the obtained lands are not in order, some immigrants want to withdraw from the agreements. To avoid this, an agreement is created, called the Mayflower Compact by which the members at the spot found a community. The colony is based on Christian doctrines but politically governed. All members are equal. The separatist groups, the other passengers and the crew are becoming one community. They call themselves the Pilgrims. Under its own regulations the first governor elected is John Carver.
Food is scarce and the contacts with the indigenous population, the Indians, are difficult. From the perspective of the latter group, this is caused by preludes of the later genocide, which makes the Indians very suspicious. During several expeditions in the area the newcomers see weakened tribes. Many Indians are sick and die largely from imported Western diseases. This makes it easy to get a place for a settlement option, Plymouth Harbor. During the first winter, 47 percent of the residents die. After that cruel winter contacts with the Indian tribes progress peacefully and the parties conclude a peace treaty.

Leiden and US national Holiday
The Indians are of vital importance to the colony. For example they explain their new neighbors how to fish or how to work the land. Thanks to this aid the immigrants have plenty stockpiles to make it through the next winter. The colony becomes viable. To commemorate this important moment, the governor decides to set up a holiday, Thanksgiving Day. The Indians are invited and together with the pilgrim community they celebrate for three days. The exact date is not known but the celebration takes place in October 1621. Many think the Pilgrims adapt, in some form, the Leiden 3-Oktober festival in which the Leiden citizens celebrate the city’s liberation from a ruthless Spanish siege in 1575 in which many starved. The supporters of this theory believe Thanksgiving is based on this Leiden celebration.

The dryness of the third year force the Pilgrims to fast and pray until the rain comes, which happens on 27 November. This date becomes the new date of the Pilgrims feast. Many states in North America follow suit and incorporate the festival in forms of local harvest festivals. The states use their own data until President Lincoln in 1863 fixes the day on November 4. From then on, Thanksgiving Day is declared a national holiday, which might have been celebrated the first time at October 3, the date the Leiden citizens still celebrate their liberation.

Dutch influence in US constitution
In the twenties of the seventeenth century, three more crossings make it from Leiden. After that, pilgrims arrive only on an individual basis. The last pilgrims from Leiden head to the colony in1637. The establishment at Plymouth Harbor expands rapidly after the first few years and more colonies are set up, also by other immigrant groups. Many Americans consider the Pilgrim Fathers, as they were called from 1799, as the founders, the Founding Fathers of the United States. They had set up the first community, a secular state, based on Christian values. This is seen as the foundation of the American democratic constitution. Tolerance and equality, as the Pilgrims exercise against the Indians and other believers, are of paramount importance in the constitution. Also Dutch civil marriage, which makes it possible for Catholics to marry in Protestant Holland, was imported by the Pilgrims to the new colony.

It is said that there are now about 30 million Americans who descend from the Pilgrim Fathers. Among them are a number of prominent figures: Marilyn Monroe, Richard Gere, Bing Crosby and American Presidents Grant, Roosevelt, Bush Sr. and Bush Jr.

What a fine result after finding a temporary shelter as refugees in Leiden, Holland!

Behold the traces of the Pilgrims in the centre of Old Leiden. You can book rooms in the Mayflower Hotel and visit:

• The Pieterskerk , the Church of St. Peter where the tomb of John Robinson can be visited. On the south wall of the church a bronze plaque honors the Pilgrims. Finally, a corner of the church is dedicated to the history of the Pilgrims.

• The Leiden American Pilgrim Museum in Beschuitsteeg behind the Hooglandsekerk church. Many of the pilgrims are buried in this church, their tombstones in the church floor can still be seen.

• The almshouse Jean Pesijnhofje where John Robinson and the less fortunate of the group lived.